With a sophisticated contemporary palette, Tara is a traditional historical crewel denoted by the use of 2-ply wool for surface embroidery and a fine linen ground.  Although linen is a strong and durable natural fibre, Tara’s linen ground is wonderfully soft and tactile with an elegant drape.  The wool is thick and the stitches are deliberate, each representing the hand of the maker, with a natural quality which is impossible to replace using a precision machine.  All our crewels are heirloom fabrics which will last for many years.

A trailing design of stylized floral motifs in slate blue and cream on a pale grey linen ground.  This is a simple design influenced by the later period of crewelwork’s popularity in the early 19th Century.  The Eastern influences of the design are updated by using a contemporary palette, which means this fabric sits well in a neutral modern scheme adding tactile depth whilst using muted colouring.  The natural grey background is an unusual addition to the Welland & Wye range, moving away from the more usual antique cream and tea stain coloured grounds.

As a natural fibre, Tara will accommodate the fluctuations of temperature and moisture levels in both period and modern homes.  Tara is suitable for upholstered occasional and statement chairs, bedheads and chaises.  As a window dressing, Tara can be used for curtains, pelmets and roman blinds.  For soft furnishings, Tara makes luxurious cushions and bedspreads.

Interior designers often specify Tara to lift a neutral scheme.  Where clients are unwilling to use bold colour, a simple, uncomplicated design using limited colours can provide the lift a scheme needs.

Tara is named after Tara Hama, a small village of 250 households in the Kashmir region in India where our crewel is made and where crewel has been traditionally made since the 19th Century

Embroidered by hand with natural variations, please contact us for exact measurements and a stock cutting. 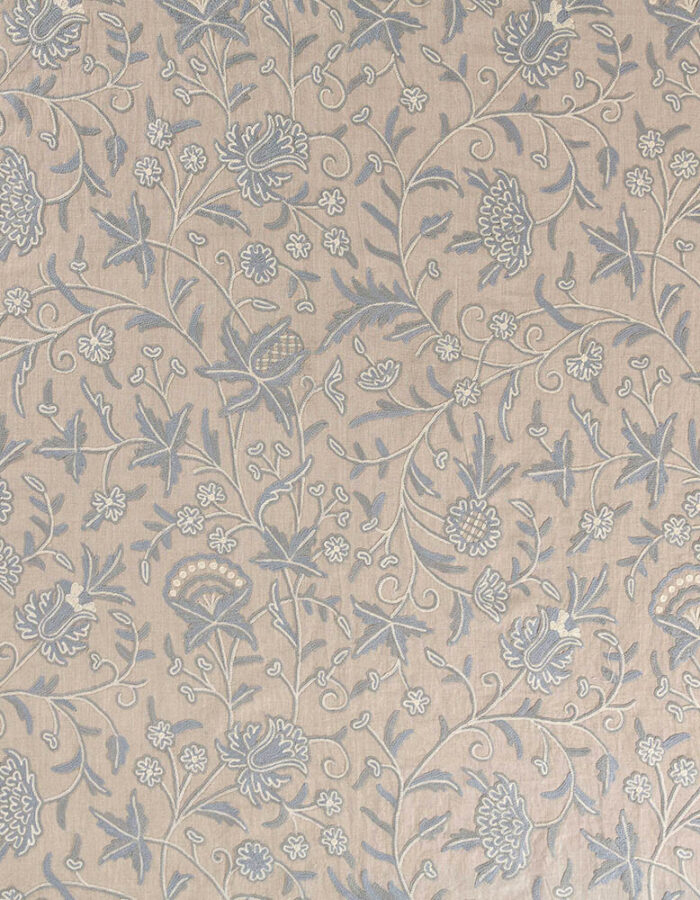 and hold on the image to zoom.